In order to make this stop on our Epicurean Adventure more palatable and less mind-fuckingly tedious, we have replaced our regular food and venue photos with portraits of one another appearing as simpletons.Bon appetit! 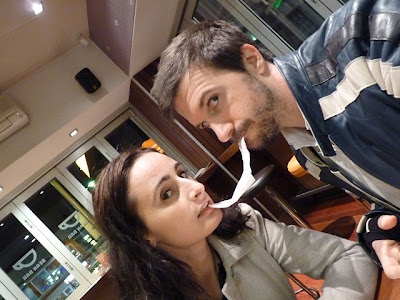 The Bean Bar
Attendance: Mele, Sam
Sam“It wasn’t as bad as you would probably imagine”Not the exact phrase an eatery wants to begin its one chance at review-based fame. The Bean Bar found us quite alone on Friday night. The enthusiastic crowds who had mobbed us at The Sushi Train (I’m sure they were there for us), were suddenly quite absent among the small tables and modest selection of decidedly not-that-out-there sandwiches. 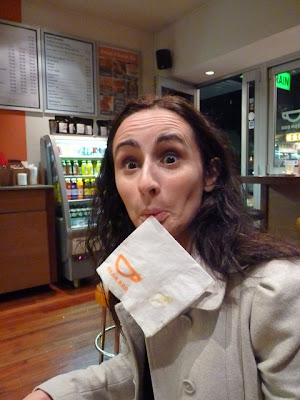 My word! What big sangers you 'ave, Guvna!

The sandwiches were pretty good. I’ve had to choke down worse chicken. 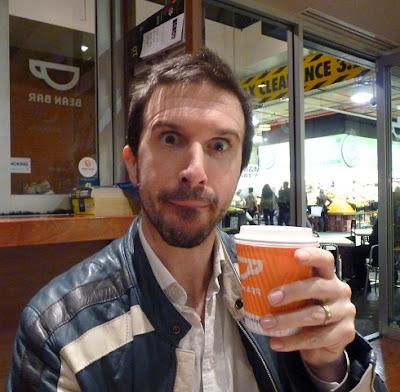 It was probably accidental, but The Bean Bar does have a certain low-key “vibe” to it. You imagine the franchise owner is convinced that having a selection of toasted sandwiches is probably about as icy cool as a coffee shop can get. Sort of like your mum steadfastly refusing to throw out those high-waisted cream slacks because you can’t improve on perfection. And, like I respect your mum for rocking those acres of waistband year after perfect year, I respect The Bean Bar for sticking with the doorstops and toasted rolls, flying in the face of fashion and popular favour. The rest of the café+food joints are probably branching out past sushi and on into … I dunno … goulash or haggis or something equally fashionable, but The Bean Bar is still there in the early-to-mid nineties, gloating over its sandwich press and its milkshakes in glasses. Charming.MeleOkay kids, it’s time for Mel’s rant:T-bean is a perplexing little place that is next to the T-bar (a much more established venue that no doubt gets the lion’s share of business).

Whooops.It’s actually ‘Bean Bar’, but this place was so forgettable….The sandwiches were very, very average. I’m not keen on toasted avocado and chicken sandwiches that have huge pieces of baby spinach and basil wilted in them. One should, never, never cook lettuce. For god’s sake, even the Americans are suspicious of this practice.Seriously, dudes, not a good idea. Even hot avocado is a no go. 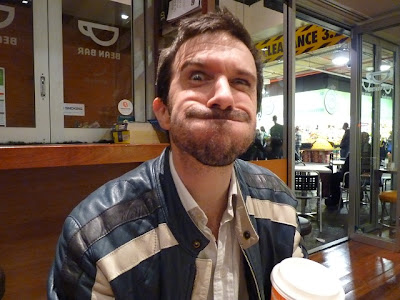 Obviously hot spinach is fine.
The ‘hot snow chocolate’ is the closest thing to breast milk I’ve ever tasted (other than breast milk). It sounded like the weirdest thing on the menu, ‘hot’ and ‘snow’ being opposing signifiers and all. 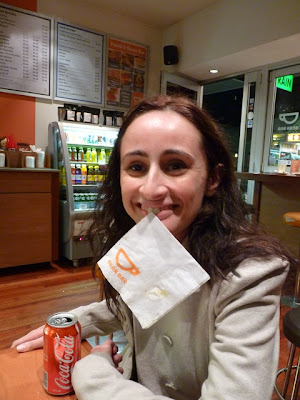 The drink they served was simple enough, a combination of milk, water and white chocolate that tasted like –you guessed it—watery milk and sugar. The drink had no flair at all. A dash of vanilla bean, nutmeg, cinnamon, strawberry Quik, anything was desperately needed.I can’t imagine anyone but a lactose tolerant infant enjoying this drink (or maybe our friend Dordy, whose health fanatic mother once caught her stirring spoons of sugar into milk, a desperate act of a sugar-deprived childhood).This place was so boring and dull that only the décor pleased me. Skip it. If you’re going to run a coffee or tea place in Adelaide, that place needs to be tied to a nationality where the product can be identified from.I am a food racist. So are you. When was the last time you went to a place called Spinelli’s Authentic Chinese Cuisine? Or Wang Pham Pizza and Pasta? Never. That’s when. It’s for the same reason you would avoid espresso from Boring Old Mr Smith’s Boring Coffee Shop For Safe Boring People Who Don’t Like Flavour. 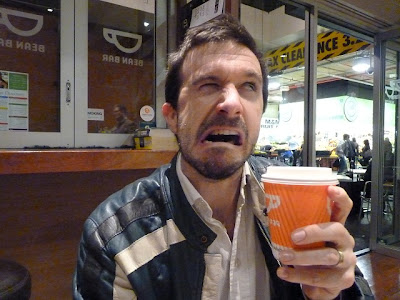 It makes sense to steer away from coffee and tea places that aren’t run by people from Devonshire, Sri Lankans, and/or various Middle-Eastern and European countries. These places have a history of brewing brown drinks that actually began more than 20 years ago. There’s a reason Starbucks doesn’t sell in Australia, and that’s because the wogs and the Asians got here first. Franchises are shit. Chances are you will get a cup of hot milk.

Tune in next time when we take Charlie to T-Bar!