I recently submitted a review of Mohsin Hamid's The Reluctant Fundamentalist. Just yesterday I received the glorious hard copy of the latest edition of Viewpoint in the post. Below is the sentence as I submitted it for publication:

"... it is the story of Changez’s time studying and working in the United States and being absorbed into the culture which grew from the September 11 attacks."

And here is the sentence as published:

"... it is the story of Changez’s time studying and working in the United States and being absorbed into the culture, which grew from the September 11 attacks."

On the one hand, I'm annoyed that my review (or at least that sentence) has been turned from a factual recounting of the basic plot of the novel into a broad statement about the United States' culture after the September 11 attacks.
On the other, I stand in quiet awe that a simple comma can transform so much.
I love language.

And the next cliff-hanger could happen at any moment!

When you're a new parent, every feature film turns into a serial!
Posted by franzy at 7:25 PM 7 comments:

Email ThisBlogThis!Share to TwitterShare to FacebookShare to Pinterest
Labels: parenting

I am sick to fucking death of the prevailing attitudes about fatherhood. If mothers are still seen as the ones firmly ensconced at home, writhing in throes of whitegood-enabled ecstacy while they slowly, blissfully euthanise their thankless, smart-arsed children with ever more powerful anti-bacterial cleaning agents, then we fathers are still firmly on the outer. Clueless, spineless morons from Mars, we are, one and all. Footballs in one hand, nutsack in the other.
Before Charlie was born, as The Expectant Father, I received much advice and commentary . (Mele did too, but that deserves its own tetchy blog). Most of that advice was in the form of a warning about The First Poo.
"You know," my newly-self-declared mentor would intone, "the first poo a baby ever does is this black, sticky GLUEY Satanical substance, which affixes itself to everything like Intergalactic Superglue. It doesn't come off, it can't be washed out." This was usually followed by the requisite evil cackle and knowing stare, just to ensure that I was quivering on the ground in disgust and mourning for the imminent loss of my immature, boyish, care-free ways to the grim spectre of responsibility.
I, of course, did no such thing.
I'm a large fan of self-deprecation, but in this instance, I will buck my own trend and proudly claim that when that first nappy needed changing, I changed it. And moved on with my life.
One thing about my life that did not move on, however, was this larger issue of treating fathers like naughty schoolboys who need to pick up rubbish after school in order to learn some responsibility. Most of the mainstream literature I encounter (read: theage.com.au) uses the same patronising tone that pre-feminism literature did in referring to women in the workplace.
Many difficult and strange rituals will happen to you, Mr New Dad, the tone of the piece goes. We bet you didn't think you'd be expected to pick up the housework while your wife sleeps! Did you know, she'll seem exhausted all the time and probably won't even want to have sex? Didn't think of that? Did you? You stupid boy. Daring to have children, which is clearly the sacred mother's role. Tsk tsk tsk.

Think I'm joking? Think I'm overreacting?
Please, visit the Phil&Ted's website (they make fancy prams) and take a look at the way fathers are welcomed.
"Freaked Out Dads!"
If you venture further, you'll find that the website is actually directed towards fathers who actually don't seem to be looking forward to the arrival of a new child.
Don't panic, Mr Mannering! they reassure you. No need to be a prisoner of the nursery (like Mum), with our funky kit you'll still get to: See the lads; watch the footy; build the deck ...
How about get phucked Phil! You too, Ted!

I'm sick of good fathers being marvelled at and the shit ones being let off the hook.

***
GTH - Andy Pants, you cherry-picker, you. Nice work. I was thinking red roses and passionate storm clouds, but I liked yours better.

And when the rainbow jerseys arrive it shall be complete

I always sniggered (quietly, behind my hand) about the amount of latent homosexuality in the Australian football codes. You know the line: all those fit, hard-bodied men, sweating together in and out of their tight shorts, gripping and wrestling each other for a living. It's got to be more than one-in-ten in the national leagues, right? But of course, the Australian male hegemony being what it (still) is, of course no-one is openly gay in professional football. Not in such a way that it was ever discussed.
Until now.
In case you didn't know, Matthew Johns, former NRL player has been stood down from his job for his part in a group sex scandal. Turns out it's fairly common practise for NRL players to have group sex with a woman - "team bonding" is a phrase often let slip here, like a sly testicle from ill-fitting shorts.

I'd like now, if I may to set a reading exercise (does the fun never end?!). Read the following passage taken from an article in the Sydney Morning Herald entitled 'Defiant rep star says group sex romps will keep happening'. At the end, I'm going to ask an open question which I believe, if I'm right, might just change the ugly, ugly face of Rugby League in Australia.

THE comments of one senior NRL representative player indicate how difficult it could be to change the sexual behaviour and attitudes of elite league players.

He warned group sex among NRL players would continue regardless of a warnings from chief executive David Gallop that unsavoury sexual acts would put their contracts at risk. The representative player told the Herald that his colleagues were left stunned by Gallop's hardline stance when no player had been convicted of sexual assault, adding that the caution would quickly be forgotten.

"It's fine for David Gallop to come out and say you can't have group sex but the last thing blokes will be thinking about on a Friday night at the club is David Gallop," said the player, speaking on the condition of anonymity. "I don't know how a chief executive can come out and say we can't have group sex if it's consensual. It's like discrimination because that is a person's private life. It's like saying you can't be homosexual, or you can't have such-and-such sexual preferences. How can he tell us what we can do in our private lives?

"We already have so many rules: we can't drink on these days, we can't go to these places, now we can't have group sex. About the only thing we can do these days is go to club functions, and just hang around other players. That's just isolating us more from the rest of the world, and it could lead to even more violent acts."

Are Rugby League players finally coming out of the closet?
Read the passage again, but this time bear in mind the fact that while these players appear to engage in a lot of group sex, there aren't any women mentioned. Based on this, I firmly believe that the NRL is on the threshold of throwing open the flimsy plywood doors, tossing aside the coathangers and shoe racks and announcing to the world "We're here! We're queer! We have group sex with each other!" Imagine that. Out, proud and scoring tries. I reckon the NRL fans and clubs would breathe a collective sigh of relief: no more scandals, no more 'How to treat women nice' classes, no more lies! Just good, honest, consensual sex between large groups of large men without the apparently tricky and complicated inclusion of a woman.
Of course, the game itself may suffer from the channelling of all that built-up homoerotic tension away from the playing field ...

Reasons Mele is an awesome lady #8093

"I think if you want that bottle of whiskey, you should just buy it."

Email ThisBlogThis!Share to TwitterShare to FacebookShare to Pinterest
Labels: mele

Let it be known that on Saturday the 9th of May, 2009, I officially became a man.
Did I grow pubes?
Kill a rhino?
Build a house?
Back a trailer?

I fixed a mower.

Throttle kept flipping shut so I took the carby apart and stuck a screwdriver in there to give it enough air to tick over, then I had to screw the bloody thing back together while it was running.

Then I mowed the fuckin' lawn.

That's why, darling, it's incredible! 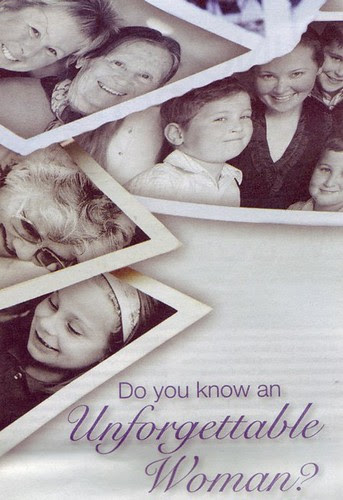 Touching, no? We all know lots of "unforgettable" women. We're all interested, yeah? Yeah. Well what is this ad imploring us to do with the thought of our own unforgettable woman?
How about I let you in on the second half of the ad. Read on.

Perhaps "forgettable" ain't the word we should be using around Alzheimer's sufferers, eh?
Do you know an unforgettable woman?
I don't fucking know! They're all fucking forgettable when you've got Alzheimer's! I'd thank you for reminding me, if that weren't one of the number one fucking symptoms! Thanks, Adelaide Review! Now what's happening in local theatre?!

***
GTH - ThirdCat for tutting me on my own blog. Bully for you.