Every couple must go through the good times and the bad before they can truly say that they have passed every test given unto them and are ready for whatever may come. For testing times prepare two people for the long, exciting journey of their lives together, safe in the knowledge that they are an inseparable one of mind, yet two of strength. Some couples go overseas together before getting married, some get a dog before trying out those nurturing skills on a child.

We have travelled around the world, gotten married, worked together and had a baby.

These were but tests of our mettle. We are now ready for The Real World and its challenges.

We are ready for:

The rules are thus (so far)(they may be added to):

1. Every food-serving establishment must be visited for dinner.

2. The restaurant must have its door on the Gouger Street footpath. No laneways, side alleys, upstairs, downstairs or Central Market food stalls. That’s just getting ridiculous.

3. Each restaurant must be sampled in order. No skipping. Nothing is too boring or too zany. We can eat at other places during that time, but that dinner will not be included in The Epicurean Adventure.

4. If a restaurant is open at dinner time and serves something that can be considered dinner, we must attend. Subway is on the list. Gellatisimo is not. Dessert-for-Dinner advocates can complain in the comments. If Coffee Bean can raise a filling club sandwich, they will get a guernsey.

5. We must order a) what the restaurant considers to be its “best” dish and b) what appears to be the wackiest, weirdest most entertaining thing on the menu.

6. If the recommended dish is too bloody expensive for it to be fun, we reserve the right to veto said dish and bitch about how bloody stingy the place is. Not us. Them.

7. Everyone is invited. Everyone else does not have to eat the wacky stuff.

8. We pay for our own meals, therefore, we write our own reviews.

9. We are not obliged to do research, be well-informed or have balanced opinions.

10. We will each write a review and you can read them RIGHT HERE! 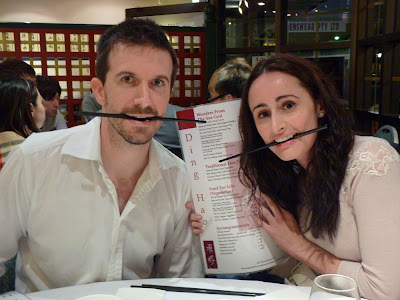 Sam - I’ll cut right to the chase. It’s a traditional Chinese restaurant, you want to know how we dealt with rule 5b. The weirdest thing on the menu was … Chicken and Jellyfish. And there were some strong contenders, which eventually got voted down by our supporters for this first restaurant of many. Kangaroo is not traditional Chinese, but was too sane as a stir-fry. Crocodile had a look-in, but I remembered that it is basically chicken. Braised trotter also got itself a support-base, but I had to be honest and confess that I would be gleefully face-first in little piggy’s tootsies before it hit the lazy susan and this didn’t really qualify it for weird, nor wacky. I did try to wriggle out of Chicken and Jellyfish for a few rounds, but there was enthusiastic nodding and so I wasn’t getting out of it without looking like a total wimp. 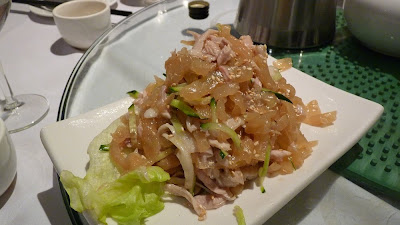 It was cold. The jellyfish took up most of the plate and, if you closed your eyes, had the texture of firm sauerkraut. I hate to disappoint, but … it wasn’t half bad. I’ve had worse. I can tell there’s some tendons and chitlins a’waitin’ for me up G-Street, but this was like mildly salty cabbage. The undercooked chicken strips took a little bit of mental stomach tightening, but the jellyfish was, in semi-cured death, much as it was in floaty, stingy life: salty, a little flaccid, terrifying at first aspect and then disregarded in favour of larger flavours. It struck me as one of the things that really, really starving people took up with so many years ago because it was literally that or rocks. But in the interceding years, everyone’s grandparents have forgotten to say ‘Hey kids, we used to eat this crazy shit when it was a mouthful of wobbly, sea slime or starving to death, but now that we have industrialisation and farming and stuff, we don’t have to eat flavourless cartilage treated with salt! We can have ribs!’ 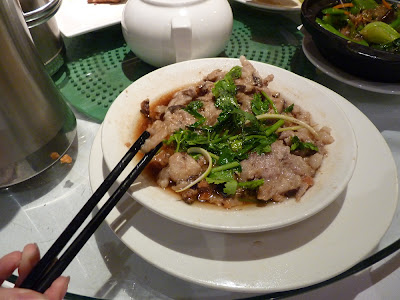 What the hell is that shit.

It looked like it had been served through a sphincter and sprinkled with lawn. I’ve seen better presentation in my grille after a country drive through a locust plague. But really, with the holy trinity of pork, prawns and anchovies, even the three-year-old they’ve got knocking this one together in the bathroom could do an all right job. We have a contender for ugliest meal.

Their claimed flagship dish was the Tea Duck, but I would have filed that one under ‘best kept secret’ Nothing to blog about. 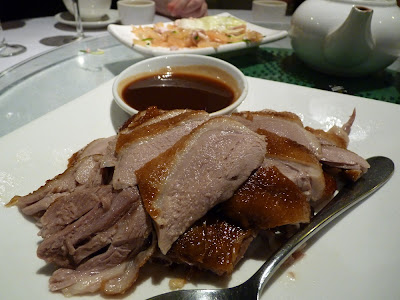 I’m used to Chinese restaurants bringing all the food at once so you can have to gorge yourself pantless and then leave, but the Ding Hao staff brought one little plate at a time. Maybe this was the tip of a new wave in the Chinese dining experience. Maybe they were just confused.

Mele - An informal vote was taken on weirdest dish by our fellow diners. Early contenders were ‘Pork Ribs with strawberry sauce’, ‘crocodile with snow peas’ and ‘chicken and jellyfish salad’.

The chicken and jellyfish salad was not a ‘wonder from the Sea Gods’. If tofu turns your stomach (in-the-what-the-hell -this texture- seems-to-be- dishwashing-sponges-soaked-in-Asian spices-kind-of-way) jellyfish is not for you.

Jellyfish has the texture of slowly decomposing rubber bands and cartilage. It has an impressive way of tasting like almost nothing but repeating on you constantly. Served with this was pink, raw chicken; this dish was a bath of cold, potentially lethal salmonella. Worst thing I’ve eaten in my life, and my nonna made me eat an entire boiled rooster crest once. Lost my appetite but was forced to eat at least one bowl. Reeeeeeeetch. Put me off for the rest of the night.

Sam said it was okay. Monkey’s nuts it was okay! It’s okay if you think Sellotape is a bitchin’ meal. I am wondering if jellyfish is digestible. I’m pretty convinced I’ve eaten ribbons that will line my colon like a tapeworm, undigested for all time. 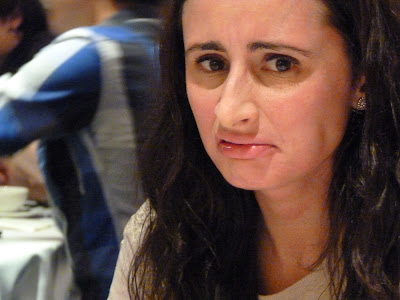 Jellyfish was a shit idea.

Aniseed Tea Duck, which was the waiter’s best suggestion, was pretty standard. The surprise of the night was the Dry Roasted Pork Ribs, which came out wet, sticky and tasty (as Manuel from Fawlty Towers would say, Che?). It got five out of five votes for being better than the Red Vinegar Ribs at Ying Chow, always held as the gold standard of ribs on Gouger Street for the last five years. So head down to Ding Haio if you love ribs. Don’t order anything else, they were amazing.

Table service was slow and inconsistent. But who cares about the banal details; I wasn’t hungry after the jellyfish. I felt nauseous and only ate the other dishes I had to. So an excellent appetite suppressant; perhaps I should set up a shonky diet and make a million bucks before people realise that it doesn’t work.

On the way home we stopped off at Cibo’s for larks. Here’ s a photo of a fire hydrant that I managed to rip from the earth with my little lady hands. Franzway was disappointed at the lack of water blasting into the air. Can’t make miracles happen, wasn’t lifting the fire hydrant from the earth enough? 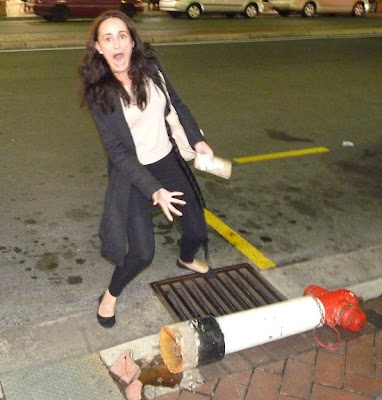 True love and jellyfish gave her the strength.

Stay tuned next time for: Subway.