Hold on tight, sweetheart. It's going to be a quickie.

Finally, after weeks if writing, fishing, riding bikes and gazing contemplatively at sunsets, I think we've finally settling ourselves down in Bribie Island. A bit. The reason you are reading this is because I've treated myself to an HOUR of internet down at the local library instead of the half and hour dash we tend to get into because of guilt and the increasing desire to save cash. The reason I'm on for an hour is because I've spent a good deal of it checking out internet plans. I've narrowed it down to two companies: Chariot appears more reliable but gives less Gigaboobies, but aaNet provides 50% more wunzenzeros and around 75% more posts on its message boards decrying it as The. Worst. ISP. Ever. For slightly cheaper. Hmm.
Whatever happens, rest assured that I will soon be downloading TV shows and blogging every half an hour with panicked recountings of how true heavy the fracking rain falls around here. In all seriousness, Mele and I actually stood at the front door gazing at the car with furrowed brows, wondering if we should move the car inside to stop it from washing away. That's South Australians for you.
The reason I am even able to consider going on an internet plan is because (drum roll please) ... I have a job. High five? High five?
You're probably right to leave me hanging there because it's not exactly a job filled with honour and career opportunity as the previous ones I've had have been. I'm making coffees at CC on Bribie. I sent in a wanky application letter and they hired me. Even after I went in there and marvelled at the modern technology like pressure gauges and thermometers that go with today's modern coffee bistro. Back in The Day when I used to make coffees for bushwalkers at Eagle On The Hill (now defunct) I used to make it so it looked right and re-make it if anyone complained very very loudly. Apparently feeling how hot the milk needs to be with your finger doesn't really fly in the big leagues. Nonetheless, I start on Thursday.
I almost didn't. In a shocking display of tact and restraint I neglected to ask if 'brewster' was The CC's corporatised version of the very specialised, professional ethnic-sounding title 'barista'. When everyone I met at the place on my training day referred to me as working as the new 'brewster', I felt that this was certain and was about to ask why they didn't just call it 'barista', like the rest of the world. Only a small voice stopped me. The small voice said:
'It's their accents, you over-educated South Australian nonce. They are saying "barista". You're not in fucking Kansas any more.'
Phew.
So, I start on Thursday. If you're in Bribie, don't come and have a coffee for a few weeks until I've gotten out of the habit of sticking my finger in the milk jug to see if it's just right. 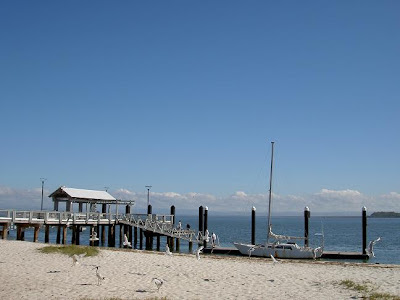