Indiana Groans, Grunts and Has a Sit Down and a Cup of Tea

It is 3:25pm on a sunny Bribie Winter Day. I have been fixing my Phd novel since this morning and have just finished an easy chapter which was so brilliantly written that the only editing needed was patting myself on the back for twenty-five minutes for being such a clever boy.
The following chapter, however, was not written by me, but dictated by the last Indian telemarketer who found my number. I promised to sign up for a home loan renegotiation in return for her writing a difficult linking chapter in my otherwise flawless* manuscript. I basically explained what had happened previously in the book, what was going to happen next and told her to keep it under 2000 words.
She messed up. Totally. Don't give me all that English being her second language bullshit either. A woman who is that conversant with Australian mortgage regulations should at least understand the concepts of maintaining tense and 'show, don't tell'.
So now I'm totally stuck fixing up the mess she made of my otherwise perfect novel and I still have to buy dinner ingredients, attend Gun Club and prepare dinner.
I could either:
a) Embark on the long and arduously adjective-laden journey that is rewriting an entire chapter so that it doesn't suck goats' balls. Or,
b) Post a movie review I wrote just after I arrived on Bribie Island and was treated to my first experience of The Twin by my lovely Aunty Brenda.

Indiana Jones and The Kingdom of the Crystal Skulls

It ain’t natural. Indiana Jones movies are modern fairy tales told with panache and honesty and heart. Harrison Ford is a genuine masculine action hero: beaten up, brash, mostly hard-boiled and just serious enough. I’ve watched all three Indiana Jones movies many, many times. They are boysy escapist fantasies with clever believable stunts which treat their audiences with enough respect to know that it’s all in fun.

Indiana Jones and the Kingdom of the Crystal Skulls looks as though it were made by those greasy advertising hotshots from the Commonwealth Bank commercials. The background research appears to have consisted of watching all three classic movies on their Blackberrys in between sales meetings. The scenarios and basic concepts for the stunt set-pieces were all stolen or copied from the other movies. The beginning set-up (bad-guys masquerading as top brass shoot their way into top secret military test sight) didn’t even come from an Indiana Jones movie. They photocopied the first few pages from The Rock and changed the time of day. That’s it. Set up, execution, follow-through, reasoning, background, everything was the same.

I’ll give it to those suave little media-savvy greaseballs behind the screenplay, they certainly picked up on what gave the other Indiana Jones movies their backbone (except for Temple of Doom, perhaps). The political undercurrents driving Raiders of the Lost Ark and Holy Grail shifted them from Biggles Goes Digging to, well, Indiana Jones. Indy wasn’t just fighting against greedy bad guys, he was fighting Nazis! We all know who the Nazis were and we all understood why they wanted the Ark or the Grail. But in Crystal Skulls, the Nazis are long-gone, the war is over and we are all expected to be able to transplant ourselves into the McCarthyist era of the late 50s where everybody was either a commie or shitting themselves about commies. Reds under beds: ring any bells? Probably not, because the enemy has since been revealed (via other, better-executed films such as Good Night and Good Luck and even The Iron Giant) to actually be McCarthy and the US administration itself, which was running around pointing fingers at everybody. So when some actual reds turn up in this latest film as the real bad guys, it is as though Indy is suddenly fighting real live witches and we’re all expected to eat our popcorn and believe it. They say 'Stalin' a few times and speak in Russian but as interesting and distinguishable bad guys, they are simply a lesser, sillier-looking lot of mustard-uniformed henchmen. The big joke about the communist threat is that when The Wall came down, it was all revealed to be mostly stone-age technology riddled with corruption, incapable of actually taking over anybody or anything. It was precisely this kind of ineffectual “ve vill contrrrol ze verld by psychic power” thinking that rendered the Soviet Union such a toothless tiger in the first place. We all know that now, so it’s a bit flaming rich to ask the audience to believe A) that world-ruling psychic power represents an actual danger in the film and B) that Indy wouldn’t automatically snigger behind his leather sleeve and lead those morons wherever they wanted to go because he knows that option A) is a lot of hocus-pocus bullshit.

Our Cate is a fine actress, but here she is a non-threatening waifette with an inexplicable penchant for sword-play. She doesn’t get to torture anyone to make us scared. She doesn’t push a henchman into a trap in order to see what happens. The scariest thing about her is her severe, black little haircut and her ill-fitting little trousers. There is an old theatrical maxim: never show the audience a gun unless it is going to be fired. Chekhov famously flouted this rule for dramatic tension and realistic effect. However, Indiana Jones is not Chekhov. I severely doubt the fact that Rrrrrussian Cate never gives anybody the old run-through with her rapier is a tip of the bear-skin hat towards The Cherry Orchard. There ain't no dramatic tension around here, pardner.

Harrison Ford is old. Old old old. He even says so in one of his first lines. Soon after which he goes scampering over mountains of wooden crates to outrun a jeep. Lethal Weapon 4, for those of you who didn’t watch it, showed an aging, fat Danny Glover and a Just-About-To-Grow-A- Salt’n’Pepper-Beard-And-An-Outlet-For-Anti-Semitism Mel Gibson somehow managing to beat an agile Jet Li to death using their pudgy American fists against Jet Li’s three decades of rice, vegetables and daily martial arts training. That the film-makers ask you to believe this shows their real lack of respect for their audience. Crystal Skulls does this spit-in-your-drink trick over and over and over and over again. You can see Ford puffing even as he raises his fist to deliver a knock-out punch to one of the glass-jawed sissies Cate has chosen to protect her as she scours the earth for “artefacts she believes have paranormal properties”. You ever see John Howard bowling? Watching Harrison do a fight scene is the same, but with a more sympathetic camera crew.

Then the girl turns up. And Harrison turns into a simpering old dolt. No one wants to see Indy sorting his garbage or writing a birthday card to his grandma. So exactly why we are expected to enjoy watching the man who guns down Nazis and runs back into collapsing temples for his hat making kissy-boo-boo faces is beyond me. The girl is Karen Allen. She was gorgeous in Raiders and still has the pinball-extra-game# smile, but she, like Ford, has aged. So what? Ten out of fucking ten to the advertisers-I-mean-film-makers for bringing her back and sticking her in the film. Hooray for older women in film. If only she actually got to do something. All of her lines are spoken to either Indiana Jones or her kid and all of them either repeat something they have said first or are intended to poke some tedious fun at the fact that she’s a middle-aged mom. In Raiders she was drinking Nepalese goat-herders under the table for extra cash. In Crystal Skulls she is immediately running around after the tedious men in her life, one of whom gets to be madly in love with her again because the focus groups wanted a romance.

The worst part about all this is that there were no 22-year-old advertising executives from California brought in to creative consult the Indiana Jones franchise into a modern-day flash-crash flop. This one was made by Lucas and Spielberg. The same two guys who brought you a lot of other movies you may have heard of and enjoyed. Like the first three Indiana Jones’, for example. Mad with power, they drank eight litres of civet espresso each, made out a little and put together something they thought everyone would enjoy if they had seen and/or remembered and/or had ever heard of the first three movies. They ruined their own good work. It ain’t right.

Booo. Boooooo. The only good bit was Shia Le Beuf and even he had to do and say stupid things for ninety-seven percent of the time he was onscreen. Boooo.

* It cannot be proven otherwise, I tell you!
#Apologies to Grant Naylor.

***
GTH - Points to Kath for Tron reference. That thing as actually a weird floating sculpture in Brisbane's South Bank near the Art Gallery. Posted for the sheer joy of looking at something that exists purely for art. 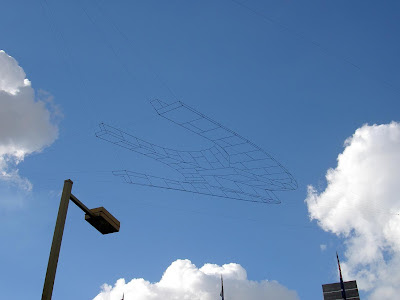