I just had the incredibly frustrating experience of typing a long and whimsically intelligent comment on Milly-Moo's blog, only to have Blogger eat it. So I'm turning it into a blog post. Clever eh? Yeah ... well ... to you too, buddy.

Her excellent post revolved around the dilemma that must be facing thousands of Australian parents at this very moment: you and your family live in Australia and ascribe to Australian culture, but your children want to go trikRtreetin. Why? Because they saw it on telly. Or one of their bratty (let's face it) little friends saw it on telly and thought it'd be a swell way to get their paws on some free candy. They want to dress up in the spooky costumes that are just about covering every retail shelf available and knock on strangers' doors, squeal the magic words and be showered with the high-sugar vittles from the huge bowl that every Australian stranger knows to keep by the door on the 31st of October every year.
How the hell do you resist that kind of cultural blackmail? How do you stop the little darlings from harbouring resentment for ever more because you didn't let them join in the assimilation-I-mean-fun?
How? HOW?
Easy.
Yes, it's simple.
That got your attention, eh?
This is a trick my father taught me (because he used the same basic technique on me once, which I will tell you about in a minute): when your eager-eyebrowed offspring ambushes you with the innocent request to go skipping about the neighbourhood for candy and treats like they do on TV and like Melinda-Jane did last year, you simply sit them down and explain that Halloween and trikRtreetin are American customs. Not Australian ones. We have our own customs, like eating yiros' and voting compulsorily. Then, while that's sinking in, you take them down to the supermarket, give them ten bucks and tell them to buy as many sweets and lollies (use the proud Australian vernacular) as they like. Then take them home and sit on the couch watching movies with them while they pump their guts full of whatever it is they've bought and yelling "Fuck off! We're in Australia!" in loud, cheerful voices whenever a trikRtreeter comes a'knockin'. They still get the lollies, but without the horrid cultural indoctrination. After that, they can make of it what they like.
How did old Dad pull this one over me?
I wanted to go to McDonald’s. Oh yeah. Despite being the son of Captain Anti-America, I still coveted the Big Mac, the Cheeseburger, Hamburglar’s fries. I wanted to be served by Grabble or Grobble or whatever the fuck his name was and live in shiny-benchtopped heaven.
Dad always said no.
I probably only asked him once, but once was enough to get the theme of future requests, debates and discussions surrounding Maccaz. But, they’re a sneaky, evil, wicked bunch (in case you haven’t seen Super Size Me or McLibel). They got to me eventually. Through school. Free Big Mac vouchers. I could hardly believe my luck. To a seven-year-old, this was the winning scratchie. I put it carefully in my bag and took it home. I had a brief panic when I couldn’t find it, and then another after I’d found it when I realised that the expiry date was the next day.
‘What do you want for lunch, Sam?’
‘Dad, um, I’ve got this, um, can I, can we, can you take me to McDonald’s? I got a voucher thing from school.’
Silence. Unimpressed, disaffected silence.
‘Fine. Let’s go now, I want to make my lunch.’
McDonald’s. I was finally getting to go to McDonald’s! Not for fries or a cheeseburger, but a Big Freakin’ Mac!
We walked out to the car together. It was very hot and I held my voucher in my hand to make sure it didn’t blow out of the open window. We drove quickly to the McDonald’s on the Cross Rd intersection and parked in the car park. I wasn’t quite sure what to do, but Dad followed me inside and up to the counter. I quietly gave my precious voucher to the man behind the counter and he turned around, yelled something and passed me a hot cardboard box.
‘You ready?’ asked Dad.
‘Yeah.’
We went out and sat in the hot car in the car park. I opened the hot box and took out the big, not-so-big Mac. It had tart mayonnaise and orangey cheese and lots of thin shreds of warm lettuce kept falling out of it and onto my t-shirt. I felt a bit sick eating it in the sun, but I was still eating a Big Mac. I finished it and put the cold, soft edge bit back into the box.
‘Done?’
‘Yes.’
‘Put that box in the rubbish bin.’
I got out of the car and walked across the hot car park and put the box into a bin filled with more greasy cardboard. After that we drove home and Dad made a sandwich and I never felt like McDonald’s again.
Take away the facepaint, the charities, the music, the quirky music, the toys and the worldwide safety-net for those who are squeamish about unfamiliar food and all you’ve got is a crap burger.
Like Halloween: take away the marketing, the money spent on dress-ups, the incalculable cost of taking on yet another aspect of American culture as our own and all you’ve got is an expensive sugar spew.

I would like to extend my congratulations to Tallora and Luke on their engagement last weekend, and in particular the immense amount of fun we had dressing up for their Halloween Engagement Party. 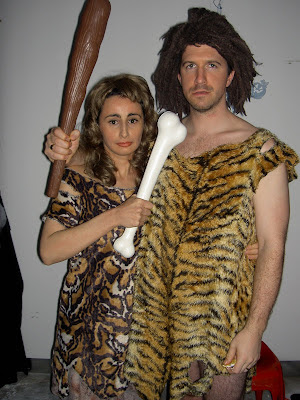 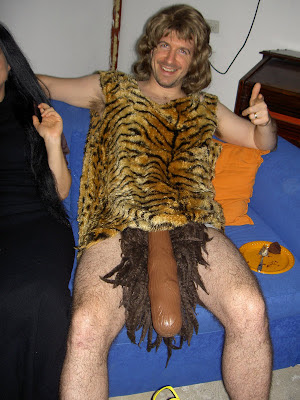