The best driver I’ve ever been. That’s me behind the wheel now. Because I’m no longer Camrynonymous. I can no longer cut and duck and dive and obfuscate. I’m a rolling representative. I am the local rolling symbol of exactly what it means to be driving around a black Skyline.
But what, exactly, does it mean?
Bogan. Hoon. Riff-raff. Dickhead. Selfish, show-off prick. Scofflaw. Maniac.
I can tell people think these things about Hooncars™, because suddenly, everyone else on the road has become the Deputy of Roadtown, and it’s their responsibility, nay, their job, to make sure that young fools behind the wheels of P-plate specials know their place. I’ve never gone for a drive yet where someone in a car next to me hasn't been desperate to remind me that I’m not special just because of this allegedly-special Dickhead-Mobile I’ve got myself.
And my god, I love it. I truly do.
Nothing is more righteous-making for my soul than having a 2012 Focus see me coming and dive in front of me, just to remind me that a two-door Nissan is not an excuse to feel special. That I should be just as unhappy and law-abiding as everyone else.

My favourite is the Completely-Non-Drag-Race Drag Race. The lights are red. I’m alone in the right lane. But not for long. Mr Honda Accord pulls up alongside.
And doesn’t look.
He’s going to show this bloody hoon dickhead what’s what. ‘Form 1 Lane’ glints briefly in the sunset 200 metres ahead. A wisp of smoke drifts across the start line.
Green light.
Señor Accord guns it. The revs are climbing, his indicator’s on, this single lane belongs to him! 50 metres back, I change carefully into second gear and watch a 43-year-old man in a gray family sedan win a race against his own sense of failing dignity.

It’s a story which repeats itself over and over. Mostly, it’s four-wheel-drives trying to ensure that I know that I’m only doing 60km/h by engulfing the entirety of my rear-view mirror with their shoulder-high grills.

A black Skyline seems to represent many drivers’ basic need to remind themselves that they have made a correct and righteous choice of car, by explaining to me that I’ve made the wrong one. And all this through the language of aggressive over-taking.

If I weren’t opposed to bumper-stickers, I would purchase one which read

Of course I believe you’re faster than me, dear.

I’m certain it would reassure people that cars aren’t everything. Loud, black, low, silly: these don’t have to be your regrets when you walk up to your white station wagon.

I understand this feeling, because I’ve been on the flipside. Yes, in the SweetRide. I was at Non-Drag-Race lights in the right hand lane and a red 2015 Maserati GT pulled up. I actually felt guilty even looking.
‘Right’ we both said. The lights went green. Off we went.
‘What are you doing?’ asked the only woman in my life from the passenger seat. Which was an incredibly good question, because it was a) raining, and b) holy fuck what were we trying to prove?
The whole thing was over and called off before anyone passed 50km/h.

And that revealed to me the beautiful thing about driving around among Men Who Must Prove The Length and Strength of Their Automotive Decisions Through Accelerating: I remember needing to pass and assert myself and mashing the foot down and hoping. In the Skyline, I don’t think I’ve ever really pushed the peddle more than halfway. It rarely even gets past a third. There’s probably cobwebs and happy little spider babies growing up on the floor beneath the Go Peddle because it’s never even touched there. This stupidly beautiful car has so much resting power curled gently about its turbo-charger, its intercooler, its gearbox, its tyres, that every time Mr Peugot 206 goes howling off into the distance, you can almost see his toes sticking out of the bonnet, while I’ve barely even touched it.
Because when you’re in a straight black line pointed toward the horizon, you don’t really need to remind every scalp-scratcher in a Kluger who’s happiest with their sensible life decision. 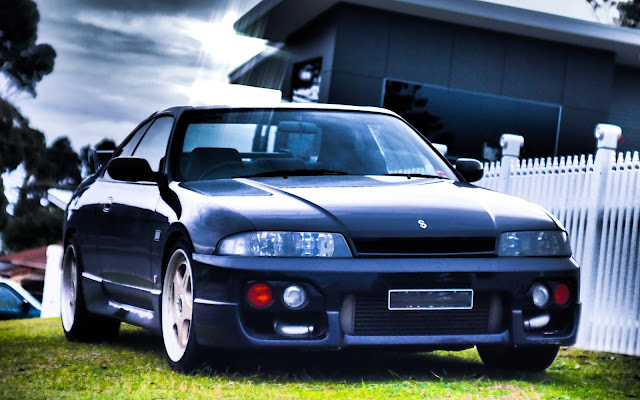