Have you ever borrowed someone's time? How do you give it back?

I've got to admit that, while it would be incredibly frustrating to have happen to you, and while it's spiritually demoralising to watch happen to your own country's team (or the team of a country you believe should win), I love bad refereeing decisions. Livens the game up. Makes me laugh. Laugh at the impossible! Ha! Ha ha!

Which brings me to Franzy's blogging rule No. 39: You know you're scraping when you blog about television. I've always maintained that this blog wouldn't be a diary or a scrap book or a bitch-about-work journal. It's been all three over the years and there's been ups and downs, periods of rain and drought. Lately, however, I am (like I imagine the much-missed, but always just around the corner Ninjacockle) finding myself not only time-poor, but brain-poor as well. We only have so much luv to guv, as our trans-Tasman neighbours would put it (ut). So, to turn this briefly into a journal: I work 9 to 5. I get home. I do family stuff. I put the boy to bed. Three nights a working week, I sit down in front of the computer and try to read and write PhD stuff. It's tough. Lots of the time I don't make it. Saying 'No' to close friends who just want to come over for dinner and a baby-viewing is much, much harder than saying 'Nah, tomorrow night' to studying from 8pm until 10pm or whenever the words begin to go double on the screen.

I am writing this at 11pm. Screw what time-posted thing says. That's Yankee time. 11pm it is. And the worst bit about that is that I'm trying to line myself up with the little picture in my head of the masterful genius writer, slaving away while the rest of the world (time zone) withers and slumbers. But the fact is that my brain is a little tired. I'm not cracking code for living, but I'm not digging ditches, either. My brain's default setting after about 8pm is: "Whiskey/TV". Turning that into "PhD then flighty, creative book ideas" requires a little more flick of the switch. Even churning out a blog entry which doesn't rely on my son's radiant beauty for value is usually beyond me. 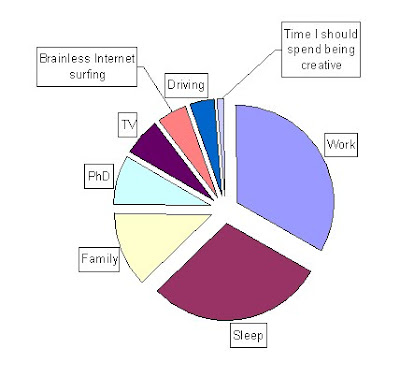 You'll notice in the graphic to my left, that my main activities, work and sleep, are the only ones I can prove that I do on a regular basis.
Sleep because I am still sane(ish)(or am I?)(Who said that?)(etc) and work because I'm able to pay for this internet and the food that keeps me from falling over.

The only non-accounted-for activity is 'Time I should spend being creative'. I say this because it's normally time that ends up being TV or Brainless Internet surfing.

But tonight, it's blogging.

Where the hell did all this energy come from?

Email ThisBlogThis!Share to TwitterShare to FacebookShare to Pinterest
Labels: not writing, writing